Equilibrium and non-equilibrium concentration fluctuations in a critical binary mixture

When a macroscopic concentration gradient is present across a binary mixture, long-ranged non-equilibrium concentration fluctuations (NCF) appear as a consequence of the coupling between the gradient and spontaneous equilibrium velocity fluctuations. Long-ranged equilibrium concentration fluctuations (ECF) may be also observed when the mixture is close to a critical point. Here we study the interplay between NCF and critical ECF in a near-critical mixture aniline/cyclohexane in the presence of a vertical concentration gradient. To this aim, we exploit a commercial optical microscope and a simple, custom-made, temperature-controlled cell to obtain simultaneous static and dynamic scattering information on the fluctuations. We first characterise the critical ECF at fixed temperature T above the upper critical solution temperature Tc, in the wide temperature range

°C. In this range, we observe the expected critical scaling behaviour for both the scattering intensity and the mass diffusion coefficient and we determine the critical exponents

, which are found in agreement with the 3D Ising values. We then study the system in the two-phase region (T < T c). In particular, we characterise the interplay between ECF and NCF when the mixture, initially at a temperature Ti, is rapidly brought to a temperature T f > T i. During the transient, a vertical diffusive mass flux is present that causes the onset of NCF, whose amplitude vanishes with time, as the flux goes to zero. We also study the time dependence of the equilibrium scattering intensity I eq, of the crossover wave vector q co and of the diffusion coefficient D during diffusion and find that all these quantities exhibit an exponential relaxation enslaved to the diffusive kinetics. 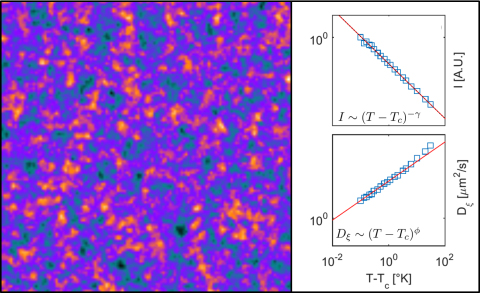