Microgravity in a thin film: How confinement kills gravity

Fluctuations in the presence of concentration gradients are long-ranged and decay diffusively for small spatial scales. At larger scales fluctuations are influenced by gravity and confinement. The confinement in the direction of the concentration gradient couples to gravity generating a slowing down that ends up in a diffusion-like behavior of fluctuations of size comparable to the vertical extension of the sample. The resulting enhanced diffusion coefficient depends on the solutal Rayleigh number of the system. For small (in modulus) values of the solutal Rayleigh number the apparent diffusion coefficient tends towards the normal one and a simple diffusive behavior is obtained. This is quite similar to what happens in microgravity conditions when the solutal Rayleigh number is drastically reduced because of the reduction of g by about 6 orders of magnitude. Experiments are shown for positive and negative solutal Rayleigh numbers smaller (in modulus) than 1000. The effect of the confinement on the statics is also investigated. Comparison with microgravity data obtained through the GRADFLEX project is performed. 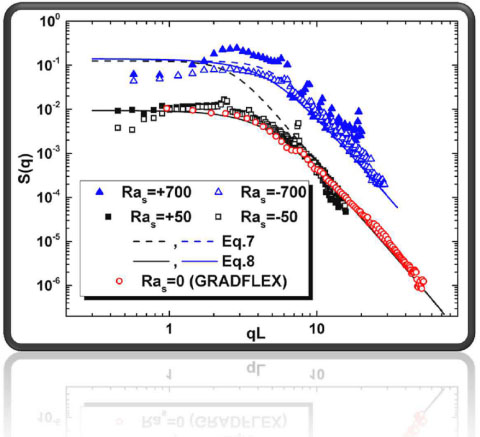