We employ molecular dynamics simulations to study the hydration properties of Dipalmitoylphosphatidylcholine (DPPC) bilayers, both in the gel and the liquid crystalline states. We show that while the tight hydration centers (PO and CO moieties) are significantly hydrated in both phases, the gel-fluid transition involves significant changes at the second hydration shell, particularly at the buried region between the hydrocarbon tails. Thus, while almost no buried water population exists in the gel state below the carbonyls, this hydrophobic region becomes partially water accesible in the liquid crystalline state. We shall also show that such water molecules present a lower H-bond coordination as compared to the molecules at the primary hydration shell. This means that, while the latter are arranged in relatively compact nanoclusters (as already proposed), the buried water molecules tend to organize themselves in less compact structures, typically strings or branched strings, with a scarce population of isolated molecules. This behavior is similar to that observed in other hydration contexts, like water penetrating carbon nanotubes or model hydrophobic channels or pores, and reflects the reluctance of water to sacrifice HB coordination. 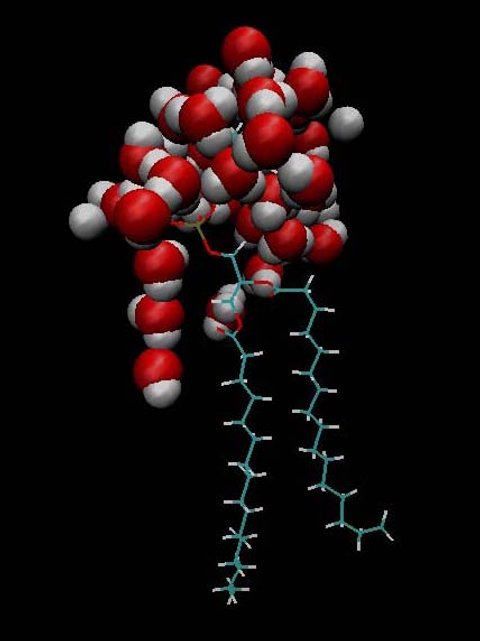