Collective dynamics of diffusiophoretic motors on a filament

A variety of uses has been proposed for synthetic chemically powered nanomotors that exploit their autonomous directed motion. The collective dynamics of these and other active particles display features that differ from their equilibrium analogs. We investigate the collective dynamics of chemically powered diffusiophoretic motors attached to a filament. Rotational Brownian motion is reduced substantially when a motor is attached to a filament and this improves motor performance. When many motors are attached to the filament, structural and dynamical correlations that may extend over long distances arise. While some features of these correlations are due to packing on the filament, there are nonequilibrium effects that are due to the local concentration gradients of reactive species produced by all motors. As the motor density on the filament increases beyond a critical value, the average motor velocity projected along motor internuclear axis switches from forward to backward directions. Knowledge of the collective dynamics of motors on filaments should prove useful when designing ensembles of synthetic motors to perform tasks such as cargo transport involving delivery of material to specific regions in complex media. 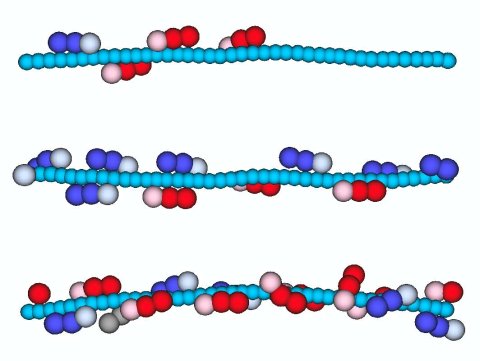