We determined the total system elastic Helmholtz free energy, under the constraints of constant temperature and volume, for systems comprised of one or more perfectly bonded hard spherical inclusions (i.e. “hard spheres”) embedded in a finite spherical elastic solid. Dirichlet boundary conditions were applied both at the surface(s) of the hard spheres, and at the outer surface of the elastic solid. The boundary conditions at the surface of the spheres were used to describe the rigid displacements of the spheres, relative to their initial location(s) in the unstressed initial state. These displacements, together with the initial positions, provided the final shape of the strained elastic solid. The boundary conditions at the outer surface of the elastic medium were used to ensure constancy of the system volume. We determined the strain and stress tensors numerically, using a method that combines the Neuber-Papkovich spherical harmonic decomposition, the Schwartz alternating method, and Least-squares for determining the spherical harmonic expansion coefficients. The total system elastic Helmholtz free energy was determined by numerically integrating the elastic Helmholtz free energy density over the volume of the elastic solid, either by a quadrature, or a Monte Carlo method, or both. Depending on the initial position of the hard sphere(s) (or equivalently, the shape of the un-deformed stress-free elastic solid), and the displacements, either stationary or non-stationary Helmholtz free energy minima were found. The non-stationary minima, which involved the hard spheres nearly in contact with one another, corresponded to lower Helmholtz free energies, than did the stationary minima, for which the hard spheres were further away from one another. 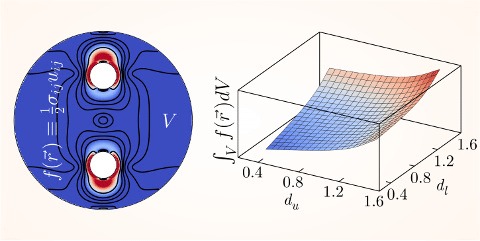