Thermodynamic, hydrodynamic and rheological interactions between velocity-dependent thermostats of Lowe-Andersen (LA) and Nosé-Hoover-Lowe-Andersen (NHLA), and modified Lees-Edwards (M-LEC) boundary condition were studied in the context of Dissipative Particle Dynamics method. Comparisons were made with original Lees-Edwards method to characterise the improvements that M-LEC offers in conserving the induced shear momentum. Different imposed shear velocities, heat bath collision/exchange frequencies and thermostating probabilities were considered. The presented analyses addressed an unusual discontinuity in momentum transfer that appeared in form of nonphysical jumps in velocity and temperature profiles. The usefulness of M-LEC was then quantified by evaluating the enhancements in obtained effective shear velocity, effective shear rate, Péclet number, and dynamic viscosity. System exchange frequency (

) with Maxwellian heat bath was found to play an important role, in that its larger values facilitated achieving higher shear rates with proper temperature control at the cost of deviation from an ideal momentum transfer. Similar dynamic viscosities were obtained under both shearing modes between LA and NHLA thermostats up to

, whilst about twice the range of viscosity (

) was calculated for M-LEC at larger probabilities (

%). The main benefits of this modification were to facilitate momentum flow from shear boundaries to the system bulk. In addition, it was found that there exist upper thresholds for imposing shear on the system beyond which temperature cannot be controlled properly and nonphysical jumps reappear. 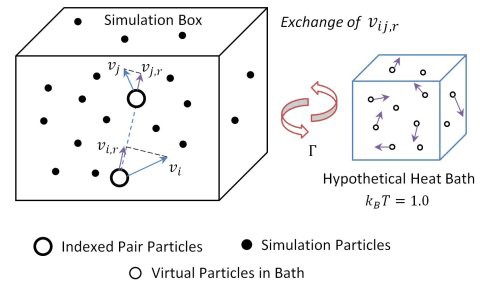