We present a detailed analysis of topological binding and elastic interactions between a long, and micrometer-diameter fiber, and a microsphere in a homogeneously aligned nematic liquid crystal. Both objects are surface treated to produce strong perpendicular anchoring of the nematic liquid crystal. We use the opto-thermal micro-quench of the laser tweezers to produce topological defects with prescribed topological charge, such as pairs of a Saturn ring and an anti-ring, hyperbolic and radial hedgehogs on a fiber, as well as zero-charge loops. We study the entanglement and topological charge interaction between the topological defects of the fiber and sphere and we observe a huge variety of different entanglement topologies and defect-mediated elastic bindings. We explain all observed phenomena with simple topological rule: like topological charges repel each other and opposite topological charges attract. These binding mechanisms not only demonstrate the fascinating topology of nematic colloids, but also open a novel route to the assembly of very complex topological networks of fibers, spheres and other objects for applications in liquid crystal photonics. 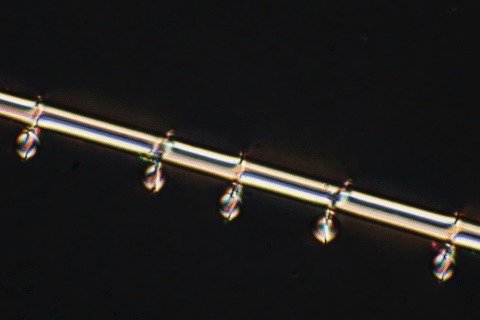