PVT data of glass formers (minerals and polymers) published in the literature are re-analyzed. All the polymer glass formers (PS, PVAc, PVME, PMMA, POMS, PBMA, PVC, PE, PP, PMPS, PMTS, PPG) present two main properties which have never been noted: a) the isobars P(V) have a fan structure characterized by the two parameters T* and V*; b) the isotherms verify the principle of temperature-pressure superposition for P < P *. From these properties we show that the Equation Of State (EOS) can be put on a modified van der Waals form (VW-EOS), (V − V *) = (V0 − V *)P */(P + P *) . The characteristic pressure P* and the covolume V* are T and P independent. In polymer glass formers P* and V* have same values in the α (melt) and β (glass) domains. The characteristic temperatures T * deduced from the Fan Structure of the Isobar (FSIb) above and below T g are different. The characteristic temperature T *(α) of the melt state is found near the Vogel temperature T 0 for linear polymers and more than 100 K below T 0 for atactic polymers (with pendent groups). This difference in atactic polymers (and in some low molecular weight compounds) is explained by the importance of the β motions due to the pendent groups. The independence of T 0 on P is discussed. A modified VFT equation (analogous to the compensation law and Meyer-Neldel rule) giving the relaxation time τ of the α motions as a function of P and T is proposed. The fan structure of the isotherm logτ versus P is explained. It is shown that organic non-polymeric liquids (C6H12, C6H14, DHIQ, OTP, Glycerol, Salol, PDE, DGEBA), mineral glass (SiO2, Se, GeSe4, GeSe2, GeO2, As2O3 and two metallic glasses (LaCe and CaAl alloys) verify this VW-EOS with similar accuracy. The relation P * = B 0/γ B among the characteristic pressure P *, the zero-pressure modulus B 0 and the Slatter-Grüneisen anharmonicity parameter γ B deduced from the VW-EOS, is observed in all the glass formers. 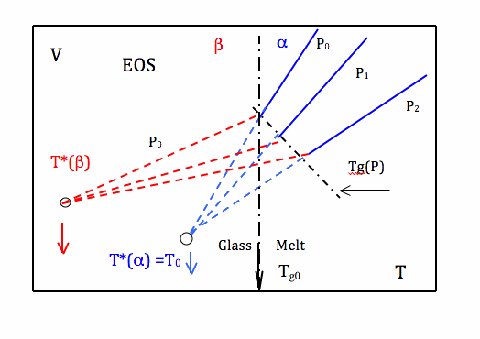