One of the targets of the experiment IVIDIL (Influence Vibrations on Diffusion in Liquids) conducted on-board ISS was to study the response of binary mixtures to vibrational forcing when the density gradient results from thermal and compositional variations. Compositional variations were created by the Soret effect and can strengthen or weaken the overall density gradient and, consequently, the response to vibrational forcing. We present the results of two experimental runs conducted on-board ISS in the frame of the experiment IVIDIL for low and strong vibrational forcing. The experimental observations revealed that a significant mean flow is set within 2 minutes after imposing vibrations and later in time it varies weakly and slowly due to the Soret effect. A mathematical model has been developed to compute the thermal and concentration fields in the experiment IVIDIL and verify the accuracy of picture processing based on the classical approach used in non-convective systems with the Soret effect. The effect of temperature and concentrations perturbations by joint action of vibrational convection and Soret effect on long time scale are carefully examined. The model demonstrates that image processing used for non-convective systems is suitable for the systems with vibration-affected thermodiffusion experiment. 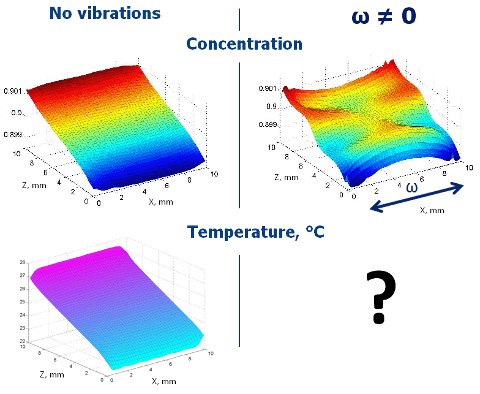