In order to find the exact form of the electrostatic interaction between two proteins with dissociable charge groups in aqueous solution, we have studied a model system composed of two macroscopic surfaces with charge dissociation sites immersed in a counterion-only ionic solution. Field-theoretic representation of the grand canonical partition function is derived and evaluated within the mean-field approximation, giving the Poisson-Boltzmann theory with the Ninham-Parsegian boundary condition. Gaussian fluctuations around the mean field are then analyzed in the lowest-order correction that we calculate analytically and exactly, using the path integral representation for the partition function of a harmonic oscillator with time-dependent frequency. The first-order (one loop) free-energy correction gives the interaction free energy that reduces to the zero-frequency van der Waals form in the appropriate limit but in general gives rise to a monopolar fluctuation term due to charge fluctuation at the dissociation sites. Our formulation opens up the possibility to investigate the Kirkwood-Shumaker interaction in more general contexts where their original derivation fails. 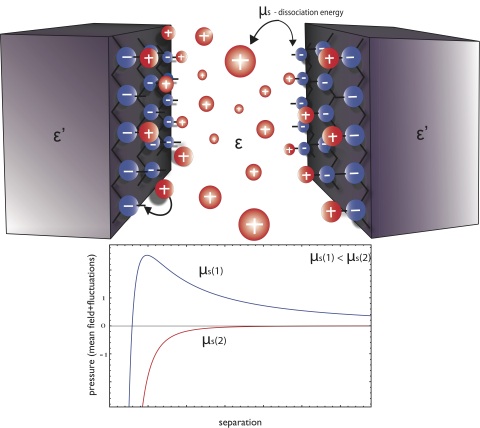