Transport in fusion plasmas is investigated with modified sandpile models. Based on results from more complete simulations, the sandpile model is modified in steps. Models with a constant source are obtained by coupling two sandpiles. Decoupling the mean field from the bursts allows one to develop a reduced model which captures some of the key features of flux-driven simulations. In the latter sandpile model, turbulent transport is mediated by the burst field while the mean-field gradient governs the transfer to the bursts. This allows one to investigate spreading, namely turbulent transport into stable regions, and transport barriers, regions where the transfer from the mean field to turbulence is reduced. Both cases are found to exhibit intermittent behaviors when the system undergoes spontaneous transitions between different transport regimes. Finally, one couples to the sandpile algorithm a species evolution algorithm that assigns a quality factor to each site. The latter appears to self-generate corrugations, or micro-barriers. These are found to naturally cluster radially in structures that are large enough to impact confinement. The mechanisms introduced to alleviate the clustering, destabilization of the corrugation by overloading and by secondary instabilities at critical radial extents, are shown to generate long-range relaxation events in space and in time with quasiperiodic reorganization of the corrugation pattern. 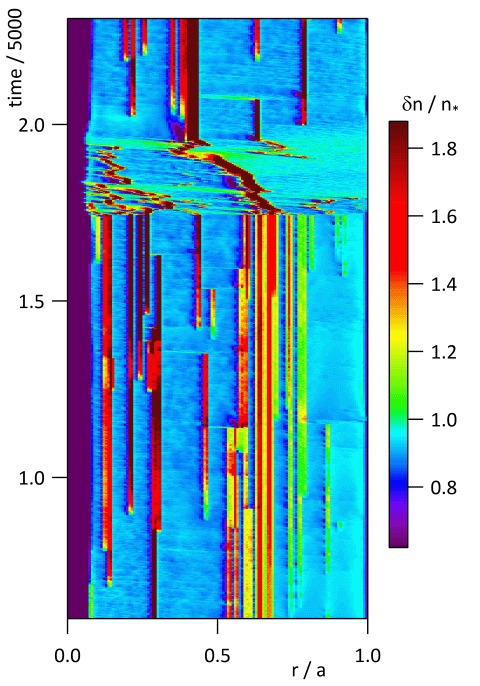