School of Physics and Astronomy, University of Birmingham, Edgbaston, B15 2TT, Birmingham, UK

Using positron emission particle tracking, the effects of convective motion and the resulting segregative behaviour on the partition of kinetic energy between the components of a bidisperse granular system are, for the first time, systematically investigated. It is found that the distribution of energy between the two system components, which are equal in size but differ in their material properties, is strongly dependent on the degree of segregation observed in the granular bed. The results obtained demonstrate that the difference in energy obtained by dissimilar particle species is not an innate property of the materials in question, but can in fact be altered through variation of the relevant system parameters. The existence of a relationship between the convective and segregative properties of a granular system and the degree of energy equipartition within the system implies the possibility of extending existing theory into the convective regime. Thus, our findings represent an incremental step towards the definition of a granular analogy to temperature that can be applied to more generalised systems and, through this, an improved understanding of inhomogeneous granular systems in general. 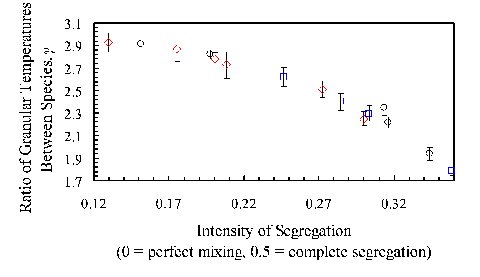