Dynamical quantities e.g. diffusivity and relaxation time for some glass-formers may depend on density and temperature through a specific combination, rather than independently, allowing the representation of data over ranges of density and temperature as a function of a single scaling variable. Such a scaling, referred to as density-temperature (DT) scaling, is exact for liquids with inverse power law (IPL) interactions but has also been found to be approximately valid in many non-IPL liquids. We have analyzed the consequences of DT scaling on the density dependence of the fragility in a model glass-former. We find the density dependence of kinetic fragility to be weak, and show that it can be understood in terms of DT scaling and deviations of DT scaling at low densities. We also show that the Adam-Gibbs relation exhibits DT scaling and the scaling exponent computed from the density dependence of the activation free energy in the Adam-Gibbs relation, is consistent with the exponent values obtained by other means. 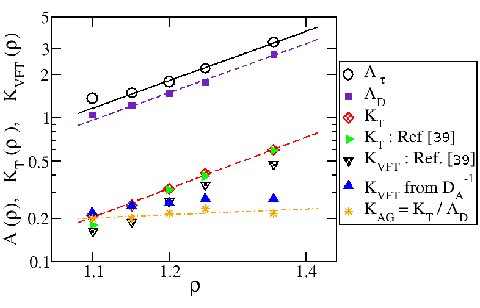