The spectroscopic characterization of layer-by-layer (LbL) films containing liposomes is essential not only for determining the precise film architecture but also to guide the design of drug delivery systems. In this study we provide the first report of vacuum ultraviolet spectroscopy (VUV) characterization of LbL films made with liposomes from 1.2-dipalmitoyl-sn-Glycero-3-[Phospho-rac-(1-glycerol)] (Sodium Salt) (DPPG) alternated with poly(allylamine hydrochloride) (PAH). Measurements in the 6.0–9.5eV range allowed us to identify the electronic transitions responsible for the spectra, which were assigned to carboxyl, hydroxyl and phosphate groups in DPPG while the PAH spectra were governed by electronic transitions in the amino groups. The surface mass density of the LbL films could be determined, from which the formation of a DPPG bilayer was inferred. This rupture of the liposomes into bilayers was confirmed with atomic force microscopy measurements. In subsidiary experiments we ensured that the UV irradiation in vacuum had negligible damage in the DPPG liposomes during the course of the VUV measurements. In addition to demonstrating the usefulness of VUV spectroscopy, the results presented here may be exploited in biological applications of liposome-containing films. 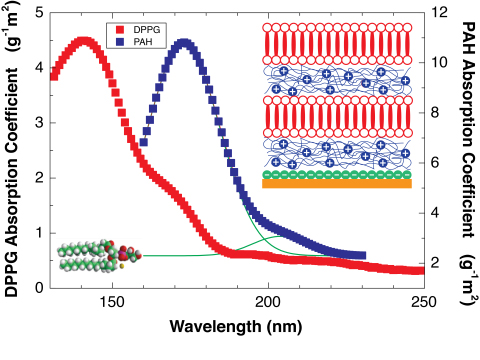