We theoretically analyze the force signal expected during unzipping through a single double-stranded DNA (dsDNA) molecule with designed subsequences or inhomogeneities with large stability differentials compared to the rest of the molecule. Our calculations describe experiments where the extension between the unzipped ends is fixed --the so-called fixed-extension ensemble-- and the equilibrium force is measured. Two different types of force traces are obtained depending on the inhomogeneity length and strength. For short inhomogeneities, a “sawtooth” force trace is obtained, with a force jump corresponding to release of the entire inhomogeneity at once, as observed in unzipping of natural-sequence DNA (Bockelmann et al., Biophy. J. 82, 1537 (2002)). For longer inhomogeneities, traces with force plateaus are obtained, corresponding to a gradual unpeeling of the strongly bound region. We find that inhomogeneities are disrupted in sequence giving rise to a succession of force spikes superposed on the baseline unzipping force of 15pN. The height of the force pulses diminishes as regions further down the molecule are unzipped, and asymptotically the force response approaches that of DNA without large stability-enhanced islands. Our model also allows us to describe the transition between intact and disrupted binding zones by thermally activated kinetics. We then analyze the related situation where multiple proteins are bound at specific points on the DNA with or without cooperative interactions between proteins, and where the removal of each protein is required for unzipping to proceed further along the DNA. The proteins bind stably to dsDNA and also to single-stranded DNA (ssDNA) but with a lower binding enthalpy. The force jumps correspond to the extra mechanical work that has to be done to overcome the large protein binding enthalpy to either dsDNA or ssDNA. Each force jump leads to the dissociation of a corresponding protein, but we do not find simultaneous release of cooperatively stabilized proteins under the range of interactions strengths considered here. Our model is then used to describe recent experiments where the stability of nucleosome and nucleosome-analogues was assayed by mechanically unzipping the DNA template. Using physiological values of model parameters we find good agreement with the data. 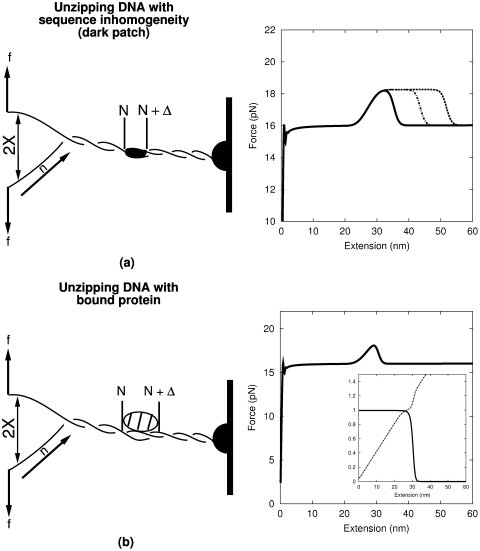