Diffusion of granular rods on a rough vibrated substrate

We investigate the effect of shape anisotropy and number density on the dynamics of granular rods on a substrate with experiments using a mono-layer of bead chains in a vibrated container. Statistical measures of the translational and rotational degrees of freedom indicate a dramatic slowing down of dynamics because of steric interactions at a value well below the highest packing fraction of the chains. In particular, the in-plane orientation auto-correlation function decays exponentially with time at low densities, but increasingly slowly as density is increased with a form which is not described by a simple exponential function. While the mean square displacement of the chain center of mass is observed to grow linearly at low densities, it is observed to grow increasingly slowly and non-linearly as number density is increased. Decomposing the displacements parallel and perpendicular to the long axis of the chain, we find that the ratio of diffusion in the parallel and perpendicular direction to their long axis is less than one in the dilute regime. However, as the density of the chains is increased, the ratio rapidly increases above one with a greater value for higher aspect ratios. This anisotropic behavior can be explained by considering a higher effective drag on the rods by the substrate in the perpendicular direction compared with the parallel direction, and by tube-like dynamics at higher densities. 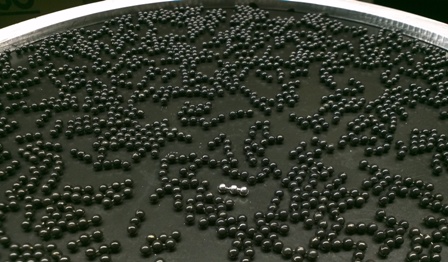