We discuss a method for producing automatic 3D connections at right places between substrates in front of one another. The idea is based on the materialization of disclination lines working as templates. The lines are first created in the nematic liquid crystal (5CB) at the very place where microwires have to be synthesized. Due to their anchoring properties, colloids dispersed into the nematic phase produce orientational distortions around them. These distortions, which may be considered as due to topological charges, result in a nematic force, able to attract the colloids towards the disclinations. Ultimately, the particles get trapped onto them, forming micro- or nano-necklaces. Before being introduced in the nematic phase, the colloids are covered with an adhering and conducting polypyrrole film directly synthesized at the surface of the particles (heterogeneous polymerization). In this manner, the particles become conductive so that we may finally perform an electropolymerization of pyrrole monomers solved in 5CB, and definitely stick the whole necklace. The electric connection thus synthesized is analyzed by AFM, and its strength is checked by means of hydrodynamic tests. This wiring method could allow Moore’s law to overcome the limitations that arise when down-sizing the electronic circuits to nanometer scale. 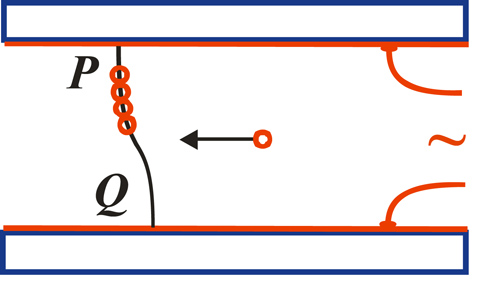