Structure and stability of cadmium arachidate (CdA) Langmuir-Blodgett (LB) films on homogeneous (i.e., OH-, H-passivated Si(001) substrates) and heterogeneous (i.e., Br-passivated Si(001) substrates) surfaces were studied using X-ray reflectivity and atomic force microscopy techniques and compared with those of nickel arachidate (NiA) LB films. While on OH-passivated Si, an asymmetric monolayer (AML) structure starts to grow, on H-passivated Si, a symmetric monolayer (SML) of CdA forms, although for both the films, pinhole-type defects are present as usual. However, on heterogeneous Br-passivated Si substrates, a combination of AML, SML, shifted SML and SML on top of AML (i.e., AML/SML), all types of structures are found to grow in such a way that, due to the variation of heights in the out-of-plane direction, ring-shaped in-plane nanopatterns of CdA molecules are generated. Probably due to stronger head-head interactions and higher metal ion-carboxylic ligand bond strength for CdA molecules compared to NiA, easy flipping of SML on top of another preformed SML, i.e. a SML/SML structure formation was not possible and as a result a wave-like modulation is observed for the CdA film on such heterogeneous substrate. The presence of hydrophilic/hydrophobic interfacial stress on the heterogeneous substrate thus modifies the deposited molecular structure so that the top surface morphology for a CdA film is similar to monolayer buckling while that for NiA film is similar to monolayer collapse. 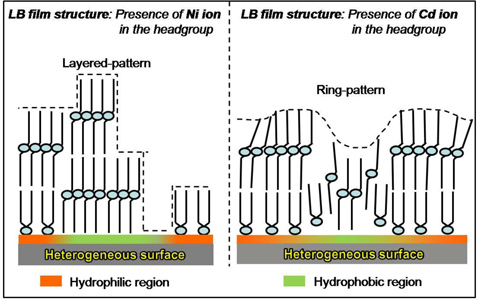