Strain localization in planar shear of granular media: the role of porosity and boundary conditions

Shear strain localization into shear bands is associated with velocity weakening instabilities and earthquakes. Here, we simulate steady-state plane-shear flow of numerical granular material (gouge), confined between parallel surfaces. Both constant shear stress and constant strain-rate boundary conditions are tested, and the two types of boundary conditions are found to yield distinct velocity profiles and friction laws. The inertial number, I, exerts the largest control on the layers’ behavior, but additional dependencies of friction on normal stress and thickness of the layer are observed under constant stress boundary condition. We find that shear-band localization, which is present in the quasistatic regime (

) in rate-controlled shear, is absent under stress-controlled loading. In the latter case, flow ceases when macroscopic friction coefficient approaches the quasistatic friction value. The inertial regime that occurs at higher inertial numbers (

) is associated with distributed shear, and friction and porosity that increase with shear rate (rate-strengthening regime). The finding that shear under constant stress boundary condition produces the inertial, distributed shear but never quasistatic, localized deformation is rationalized based on low fluctuations of shear forces in granular contacts for stress-controlled loading. By examining porosity within and outside a shear band, we also provide a mechanical reason why the transition between quasistatic and inertial shear coincides with the transition between localized and distributed strain. 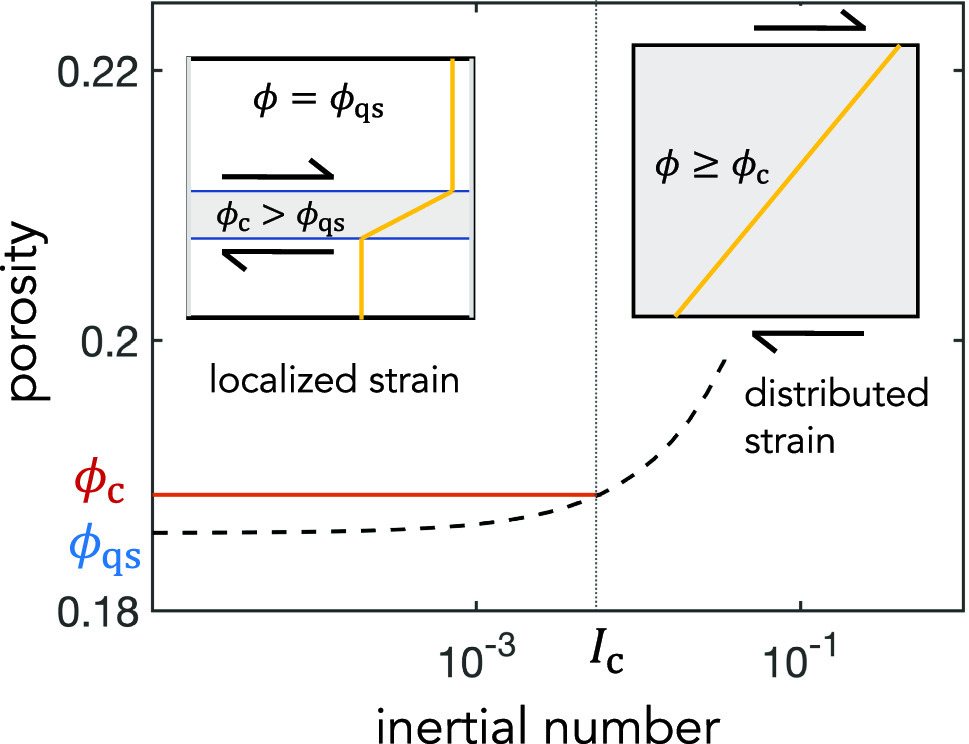