We present the results of hydrodynamic simulations using the method of multi-particle collision dynamics for a system of squirmer microswimmers moving under the influence of gravity at low Reynolds numbers. In addition, the squirmers are bottom-heavy so that they experience a torque which aligns them along the vertical. The squirmers interact hydrodynamically by the flow fields of a stokeslet and rotlet, which are initiated by the acting gravitational force and torque, respectively, and by their own flow fields. By varying the ratio of swimming to bulk sedimentation velocity and the torque, we determine state diagrams for the emergent collective dynamics of neutral squirmers as well as strong pushers and pullers. For low swimming velocity and torque we observe conventional sedimentation, while the sedimentation profile becomes inverted when their values are increased. For neutral squirmers we discover convective rolls of circulating squirmers between both sedimentation states, which sit at the bottom of the system and are fed by plumes made of collectively sinking squirmers. At larger torques porous clusters occur that spawn single squirmers. The two latter states can also occur transiently starting from a uniform squirmer distribution and then disappear in the long-time limit. For strong pushers and pullers only weak plume formation is observed. 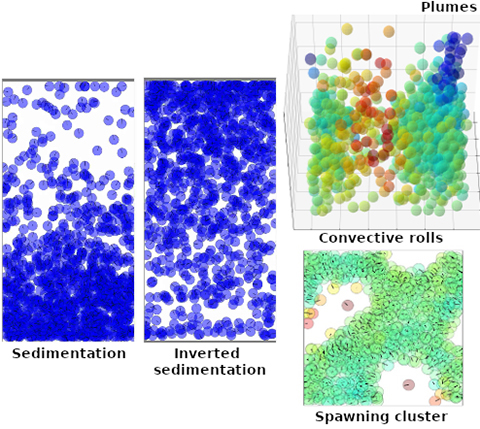