The hazards associated with travelling on highways in desert regions arise mainly from wind-borne sand disasters, such as complete or partial burial of the road surface by sand particles, and from erosion of the roadbed by the particles. To simulate the damage process caused by sand particles on roads in the desert, scaled-down tests were performed in a wind tunnel whereby sand particles of differing diameters and roadbed models of different gradients were tested and the impact trajectories of the sand particles were captured using a high-speed camera. The results showed that the impact trajectories may be classified into four types, and the proportion of each type is essentially stable with the statistical curves for the trajectories being similar to the Poisson distribution. The diameters of the sand particles and the slopes of the roadbed model influenced the impact trajectories, which also impacted the statistical values for each particle type. Owing to the Magnus force, the direction of rotation and the angular velocity of the sand particles controlled the nature of the collision trajectories; however, the direction of rotation did not remain in a fixed plane and the rotation speed only reached about 20% of the value of the first critical speed. The wind tunnel experiments enable a better understanding of the motion trajectories, rotation speed, force situation, and collision trajectories, providing a useful benchmark for research on wind-induced disasters on roads in desert regions. 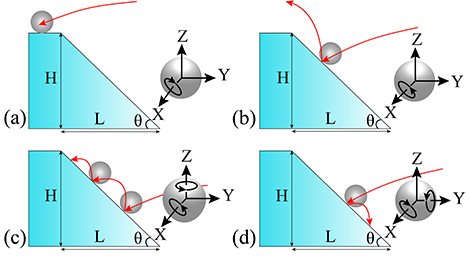