Vibrational scaling of the heterogeneous dynamics detected by mutual information

The correlations detected by the mutual information in the propensities of a molecular viscous liquid are studied by molecular-dynamics simulations. Dynamic heterogeneity is evidenced and two particle fractions with different mobility and relaxation identified. The two fractions exhibit the scaling of their relaxation in terms of the rattling amplitude of the particle trapped in the cage of the first neighbours 〈u 2〉 . The scaling master curve does not differ from the one found for bulk systems, thus confirming identical results previously reported in other systems with strong dynamic heterogeneity as thin molecular films. The excitation of planar and globular structures at short and long times with respect to structural relaxation, respectively, is revealed. Some of the globular structures are different from the ones evidenced in atomic mixtures. States with equal 〈u 2〉 are found to have identical time dependence of several quantities, referring to both bulk and the two fractions with heterogeneous dynamics, at least up to the structural relaxation time 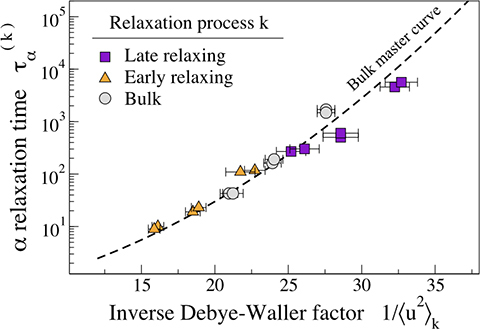