The dynamics of inertial particles in Rayleigh-Bénard convection, where both particles and fluid exhibit thermal expansion, is studied using direct numerical simulations (DNS) in the soft-turbulence regime. We consider the effect of particles with a thermal expansion coefficient larger than that of the fluid, causing particles to become lighter than the fluid near the hot bottom plate and heavier than the fluid near the cold top plate. Because of the opposite directions of the net Archimedes’ force on particles and fluid, particles deposited at the plate now experience a relative force towards the bulk. The characteristic time for this motion towards the bulk to happen, quantified as the time particles spend inside the thermal boundary layers (BLs) at the plates, is shown to depend on the thermal response time,

, and the thermal expansion coefficient of particles relative to that of the fluid,

. In particular, the residence time is constant for small thermal response times,

for larger response times, thus explaining the trends in the DNS data well. 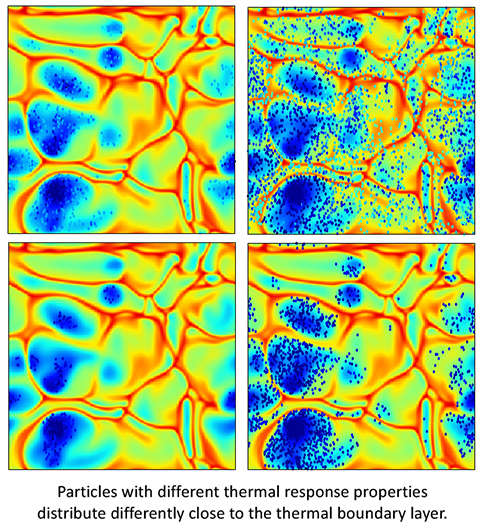