37 nm) were measured by crossed electrode capacitors (CEC), where the film is capped between Al-electrodes. For thinner films (

-relaxation), like the bulk, related to PVME fluctuations in local spatial regions with different PS concentrations. The thickness dependence of the

-process for films measured by CECs proved a spatially heterogeneous structure across the film with a PS-adsorption at the Al-electrodes. On the contrary, for the films measured by NSCs a PVME segregation at the free surface was found, resulting in faster dynamics, compared to the CECs. Moreover, for the thinnest films (

26 nm) an additional relaxation process was detected. It was assigned to restricted fluctuations of PVME segments within the loosely bounded part of the adsorbed layer, proving that for NSCs a PVME enrichment takes place also at the polymer/substrate interface. 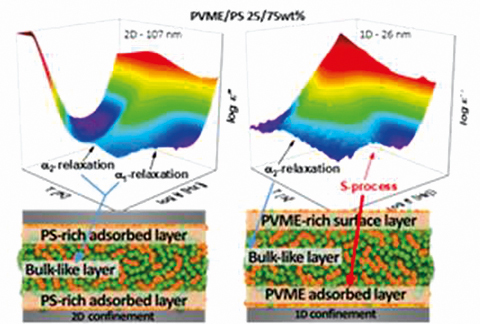