Current knowledge on limbs development lacks a physical description of the forces leading to formation of the limbs precursors or “buds”. Earlier stages of development are driven by large scale morphogenetic movements, such as dipolar vortical flows and mechanical buckling, pulled by rings of cells. It is a natural hypothesis that similar phenomena occur during limb formation. However it is difficult to experiment on the developmental forces, in such a complex dynamic system. Here, we report a physical study of hindlimb bud formation in the chicken embryo. We use electrical stimulation to enhance the physical forces present in the tissue, prior to limb bud formation. By triggering the physical forces in a rapid and amplified pattern, we reveal the mechanism of formation of the hindlimbs: the early presumptive embryonic territory is composed of a set of rings encased like Russian dolls. Each ring constricts in an excitable pattern of force, and the limb buds are generated by folding at a pre-existing boundary between two rings, forming the dorsal and ventral ectoderms. The amniotic sac buckles at another boundary. Physiologically, the actuator of the excitable force is the tail bud pushing posteriorly along the median axis. The developmental dynamics suggests how animals may evolve by modification of the magnitude of these forces, within a common broken symmetry. On a practical level, localized electrical stimulation of morphogenetic forces opens the way to in vivo electrical engineering of tissues. 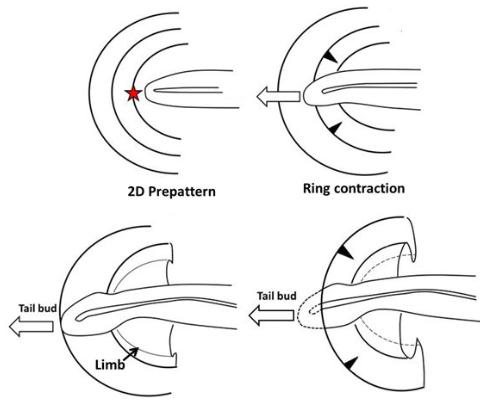