connected regions which take one of two possible areas. We assume that the optimal partition is connected and enumerate all three-connected simple cubic graphs for each N. Candidate structures are obtained by assigning different areas to the regions: for even N there are N/2 bubbles of one area and N/2 bubbles of the other, and for odd N we consider both cases, i.e. in which the extra bubble takes either the larger or the smaller area. The perimeter of each candidate structure is found numerically for a few representative area ratios, and then the data is interpolated to give the conjectured least perimeter candidate for all possible area ratios. For each N we determine the ranges of area ratio for which each least perimeter candidate is optimal; at larger N these ranges are smaller, and there are more transitions from one optimal structure to another as the area ratio is varied. When the area ratio is significantly far from one, the least perimeter partitions tend to have a “mixed” configuration, in which bubbles of the same area are not adjacent to each other. 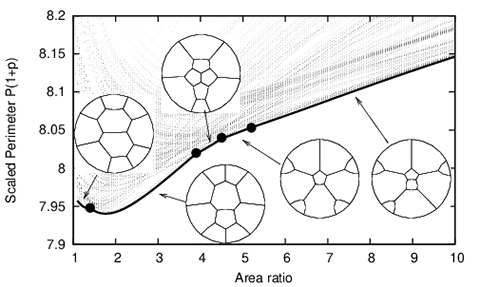