A suitable balance of convective and diffusive transport of small molecules contained in the liquid phase of a drying latex film leads to auto-stratification and to functionally graded films. Differing from blends of latex particles, which may also experience drying-induced segregation, small molecules retain their mobility after the particles have touched and have formed an elastically coupled network. The use of a thickener, which turns the dispersion into a weak gel and prevents the free flow of particles, is compatible with this approach (and even advantageous). A problem with small molecules is fast diffusive equilibration of concentration differences. For this reason, composition gradients along the lateral direction, where the characteristic length scale is centimeters, are more easily achieved than gradients along the vertical. Addition of a thickener slows down the diffusion, which aids the development of gradients along the vertical. The application example chosen was the crosslinking agent adipic dihydrazide, ADH, which takes part in keto-hydrazide coupling. Its heterogeneous distribution produces a spatially variable crosslink-density in the dry film as evidenced by Raman microscopy. A side aspect of the work is an inward flow of serum, which is observed for high-Tg films. An explanation for this “anti-coffee-ring effect” --based on pore collapse driven by the polymer-water interfacial energy combined with finite polymer elasticity-- is proposed. 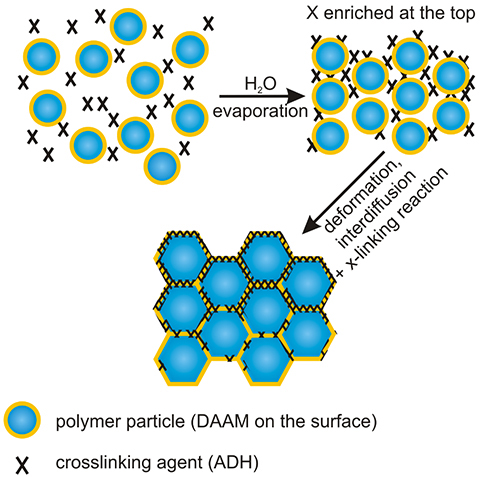