Evaporation or condensation in the vicinity of the immobile (pinned) contact line in an atmosphere of some inert (noncondensable) gas is considered here in a partial wetting configuration. Such a problem is relevant to many situations, in particular to a drop or a liquid film drying in open air. The thermal effects are not important and the mass exchange rate is controlled by the vapor dynamics in the gas. By following previous works, we account for the weak coupling between the diffusion in the gas and flow in the liquid through the Kelvin effect. Such a problem is nonlocal because of the diffusion in the gas. For generality, we consider a geometry of a liquid wedge posed on a flat and homogeneous substrate surrounded by a gas phase with a diffusion boundary layer of uniform thickness

. Similarly to the moving contact line problem, the phase change leads to the hydrodynamic contact line singularity. The asymptotic analysis of this problem is carried out for the liquid wedge of the length

. Three asymptotic regions are identified: the microscopic one (in which the singularity is relaxed, in the present case with the Kelvin effect) and two intermediate regions. The Kelvin effect alone turns to be sufficient to relax the singularity. The scaling laws for the interface slope and mass evaporation/condensation flux in each region are discussed. It is found that the difference of the apparent contact angle (i.e., interface slope in the second intermediate region) and the equilibrium contact angle is inversely proportional to the square root of

and square root of the microscopic length, whatever is the singularity relaxation mechanism. 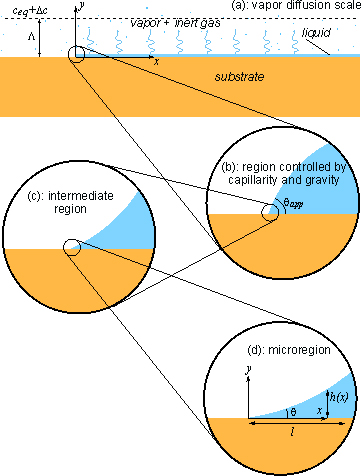