Wrinkling patterns are widely observed in nature and can be used in many high-tech applications such as microfluidic channel, self-assembly ordered microstructures and improved adhesives. In order to use the wrinkling patterns for these applications, it is necessary to precisely control the formation and geometry of the wrinkles. In this paper, we investigate the localized wrinkling of a stiff film/compliant substrate system subjected to a thrust force with a controllable micro-probe. A thin Au film is deposited onto a thick PDMS substrate attached to a glass to form the stiff film/compliant substrate system. And a micro-probe is controlled by a piezoelectric microrobotic system to exert a point force onto the stiff film/compliant substrate to demonstrate the evolution of the localized wrinkles. The experiments show that the film will wrinkle into orthoradial morphology spontaneously when it is deformed in the vertical direction, and then it will wrinkle into arcuate morphology with deformation in the horizontal direction. Since the compressive stress and tensile stress of the film are generated simultaneously, the evolution of the arcuate wrinkles is always accompanied by some radial cracks. The morphological characteristic, formation mechanism and dynamic evolution of the arcuate wrinkles are demonstrated and discussed in detail. 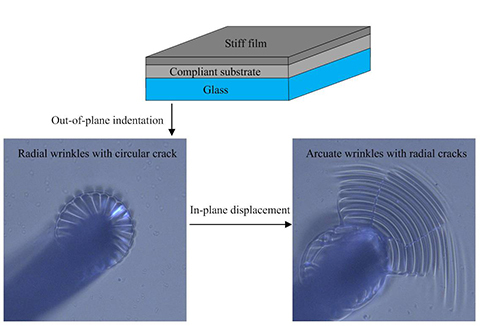