We investigate sheared granular materials composed of crushable particles by means of contact dynamics simulations and the bonded-cell model for particle breakage. Each particle is paved by irregular cells interacting via cohesive forces. In each simulation, the ratio of the internal cohesion of particles to the confining pressure, the relative cohesion, is kept constant and the packing is subjected to biaxial shearing. The particles can break into two or more fragments when the internal cohesive forces are overcome by the action of compressive force chains between particles. The particle size distribution evolves during shear as the particles continue to break. We find that the breakage process is highly inhomogeneous both in the fragment sizes and their locations inside the packing. In particular, a number of large particles never break whereas a large number of particles are fully shattered. As a result, the packing keeps the memory of its initial particle size distribution, whereas a power-law distribution is observed for particles of intermediate size due to consecutive fragmentation events whereby the memory of the initial state is lost. Due to growing polydispersity, dense shear bands are formed inside the packings and the usual dilatant behavior is reduced or cancelled. Hence, the stress-strain curve no longer passes through a peak stress, and a progressive monotonic evolution towards a pseudo-steady state is observed instead. We find that the crushing rate is controlled by the confining pressure. We also show that the shear strength of the packing is well expressed in terms of contact anisotropies and force anisotropies. The force anisotropy increases while the contact orientation anisotropy declines for increasing internal cohesion of the particles. These two effects compensate each other so that the shear strength is nearly independent of the internal cohesion of particles. 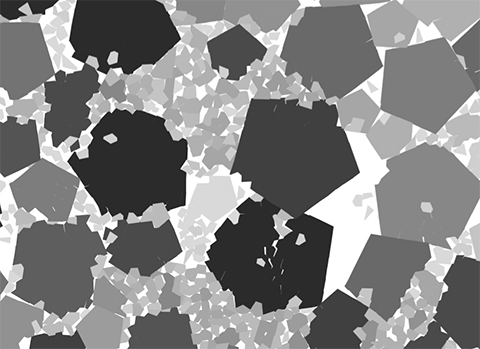