To explore the origin of interactional settling behaviors of multi-particles in wet foam, the sedimentation of two particles placed one above the other as well as placed side by side is studied. According to the average settling velocity in experiment and the average settling drag force of the two particles in numerical simulation, we show that the particles display accelerated sedimentation as placed one above the other while they display hindered sedimentation in the case of the ones positioned side by side. Furthermore, the evolution of structure and force parameters of the bubbles, such as T1 topological events, displacement vector and principal stress fields, shows that the reciprocal action between the foam and the settling particles placed side by side is more significant. The different levels of interplay for these two settling cases also give rise to the diverse changes of bubble pressure response. The bubble pressure component of the average drag force is higher for the particles placed side by side. Especially, for the first time, it reveals that these interactional sedimentation behaviors in the foam are mainly attributed to the changed pressure of bubbles caused by these settling particles at the mesoscopic level. The present results may suggest potential explanations to the cause of the complex accelerated or hindered sedimentation of more particles in wet foam. 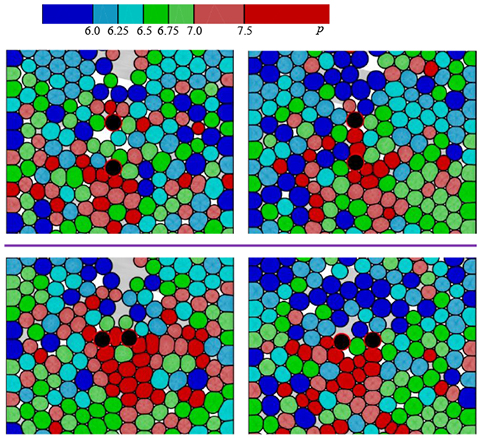