We numerically study the behavior of self-propelled liquid droplets whose motion is triggered by a Marangoni-like flow. This latter is generated by variations of surfactant concentration which affect the droplet surface tension promoting its motion. In the present paper a model for droplets with a third amphiphilic component is adopted. The dynamics is described by Navier-Stokes and convection-diffusion equations, solved by the lattice Boltzmann method coupled with finite-difference schemes. We focus on two cases. First, the study of self-propulsion of an isolated droplet is carried on and, then, the interaction of two self-propelled droplets is investigated. In both cases, when the surfactant migrates towards the interface, a quadrupolar vortex of the velocity field forms inside the droplet and causes the motion. A weaker dipolar field emerges instead when the surfactant is mainly diluted in the bulk. The dynamics of two interacting droplets is more complex and strongly depends on their reciprocal distance. If, in a head-on collision, droplets are close enough, the velocity field initially attracts them until a motionless steady state is achieved. If the droplets are vertically shifted, the hydrodynamic field leads to an initial reciprocal attraction followed by a scattering along opposite directions. This hydrodynamic interaction acts on a separation of some droplet radii otherwise it becomes negligible and droplets motion is only driven by the Marangoni effect. Finally, if one of the droplets is passive, this latter is generally advected by the fluid flow generated by the active one. 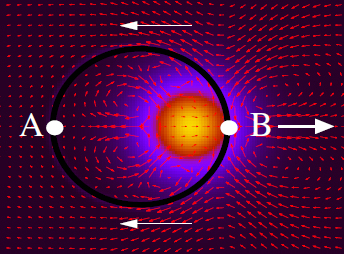