How likely are oscillations in a genetic feedback loop with delay?

Some genetic control networks display temporal oscillations as a result of delays in their homeostatic control. A relevant question about these systems is whether the oscillating regime is a rare feature, or it corresponds to a sizeable volume of the space of parameters. The answer is not trivial mainly due to the large number of parameters controlling the rate equations which describe the network. We have developed an efficient sampling scheme of the parameter space, based on a Monte Carlo algorithm, and applied it to a two-node system with delay, characterised by a 8-dimension parameter space. The result is that the volume fraction of the parameter space associated with oscillations is small but not negligible, and it is weakly dependent on the duration of the delay. The most critical parameter to control oscillations is the coupling production rates, which must have opposite sign, giving rise to a negative feedback loop. The oscillating regions are connected except along the equilibrium constants between the two species, not allowing neutral evolution along this parameter. 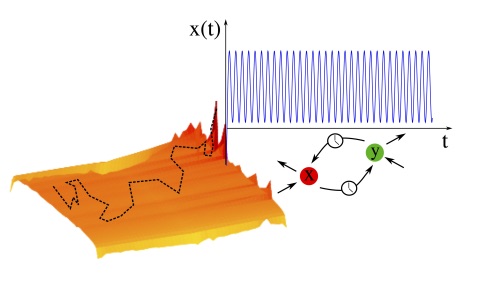