We present a theoretical explanation for the formation of nematic droplets in free-standing smectic films (FSSF) overheated above the temperature of the bulk smectic - nematic transition. The conditions for the formation of the nematic droplets in smectic films are studied on the basis of the general thermodynamic approach to the stability of FSSF. It is shown that the formation of droplets in overheated FSSF is only possible in the presence of a certain amount of thermally generated dislocation loops. We determined the gain in the free energy related with the formation of the nematic droplets, the value of the critical work and the critical size of the drops. The initial increase of the drops size is due to release of material from the growing dislocation loops. At the second stage the drops growth occurs through coalescence of the smaller drops with the larger ones. The droplets attract each other by means of capillary forces arising due to gradients of the surface energy in the area between them. Drops size evolution, the dynamics of their growth and merging are in good agreement with experiments. 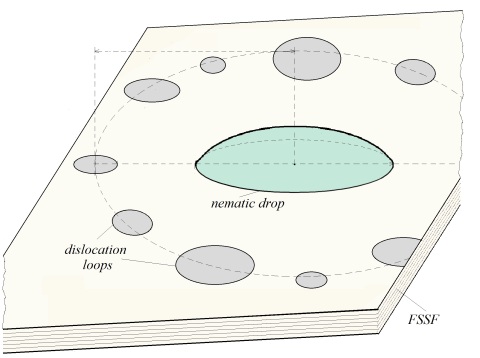