A binary isotope mixture of Lennard-Jones/spline particles at equilibrium was perturbed by a sudden change in the system's boundary temperatures. The system's response was determined by non-equilibrium molecular dynamics (NEMD). Three transient processes were studied: 1) The propagation of a pressure (shock) wave, 2) heat diffusivity and conduction, and 3) thermal diffusion (the Ludwig-Soret effect). These three processes occur at different time scales, which makes it possible to separate them in one single NEMD run. The system was studied in liquid, supercritical, and dense gas states with various forms and strengths of the thermal perturbation. The results show that heat was initially transported by two separate mechanisms: 1) heat diffusion as described by the transient heat equation and 2) as a consequence of a pressure wave. The pressure wave travelled faster than the speed of sound, generating a shock wave in the system. Local equilibrium was found in the transient phase, even with very strong perturbations and in the shock front. Although the mass separation due to the Ludwig-Soret effect developed much slower than the pressure and temperature fields in the system at large, it was found that the Soret coefficient could be accurately determined from the initial phase of the transient and close to the heat source. This opens the possibility of a new way to analyse results from transient experiments and thereby minimize effects of gravity and convection due to buoyancy. 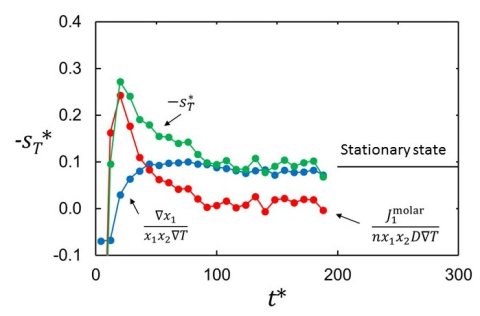