The tubular lipid membranes (TLMs) pulled out from vesicles are often used in in vitro studies of the interactions between curvature-inducing proteins and highly curved membranes. The protein molecules adsorbed at the membrane surface deform the TLM and couple with each other due to the induced strain. Here we propose an approach which models the single curvature-inducing protein action on the lipid bilayer by the multipole, the superposition of the point forces applied to the membrane in the region of the protein adsorption. We show that to be localized in the area of the protein size at the TLM surface, the force multipoles satisfying the mechanical equilibrium conditions should be composed of three or more point forces. The protein coupling energy mediated by the membrane strain is studied in detail. In the region of the tubular membrane stability the maximal distance between two neighboring interacting protein-induced force multipoles is estimated to be of the order of the TLM cross section perimeter. In the vicinity of the TLM instability in the region of the vanishing stretching force applied to the TLM, the interaction radius increases drastically. The high affinity of the single curvature-inducing protein molecule to the regions in the vicinity of the TLM ends is explained and related to the boundary conditions in the experimental set-ups. The reasons for the aggregate formation on the membrane surface are also discussed. 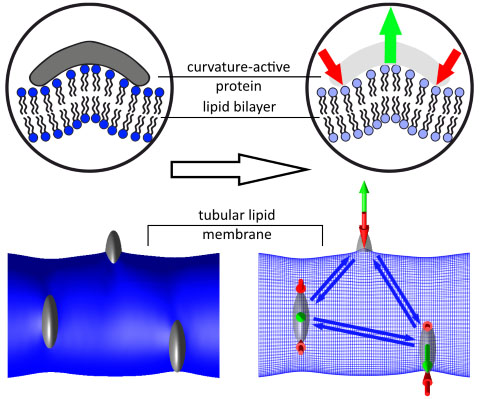