We present the derivation of the macroscopic equations for uniaxial polar nematic gels and elastomers. We include the strain field as well as relative rotations as independent dynamic macroscopic degrees of freedom. As a consequence, special emphasis is laid on possible static and dynamic cross-couplings between these macroscopic degrees of freedom associated with the network, and the other macroscopic degrees of freedom including reorientations of the macroscopic polarization. In particular, we find static and dissipative dynamic cross-couplings between strain fields and relative rotations on one hand and the macroscopic polarization on the other that allow for new possibilities to manipulate polar nematics. To give one example each for the effects of a static and a dissipative cross-coupling: we find that a static electric field applied perpendicularly to the polar preferred direction leads to relative rotations while dynamically relative rotations can lead to transverse electric currents. In addition to a permanent network, we also consider the effect of a transient network, which is particularly important for the case of gels, melts and concentrated polymer solutions. A section on the influence of macroscopic chirality is included as well. 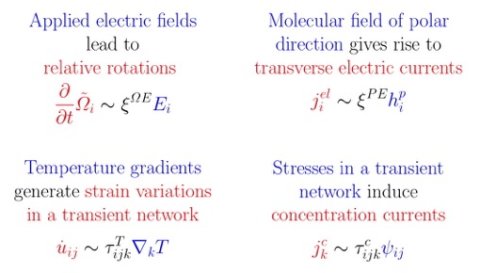