Dynamics of liquid-crystalline magnetic suspensions in a rotating magnetic field

We theoretically study the dynamics of the orientational structure of a ferronematic liquid crystal with soft planar coupling between the director and the magnetization in a rotating magnetic field. We determine critical parameters characterizing the boundary between synchronous and asynchronous rotation regimes. We show that the magnetic impurity increases the stability threshold of an asynchronous rotation regime. The critical angular velocity, the angles of the director and the magnetization rotation in each regime of orientational structure rotation are found for rigid planar coupling. We obtain that in weak magnetic fields when the main mechanism of the field influence on a ferronematic liquid crystal is associated with the effect on the magnetic particles, the critical angular velocity is linearly dependent on the field strength, while in strong magnetic fields, when the influence of a field is determined by a diamagnetic mechanism, the critical velocity is quadratically dependent on the field strength. 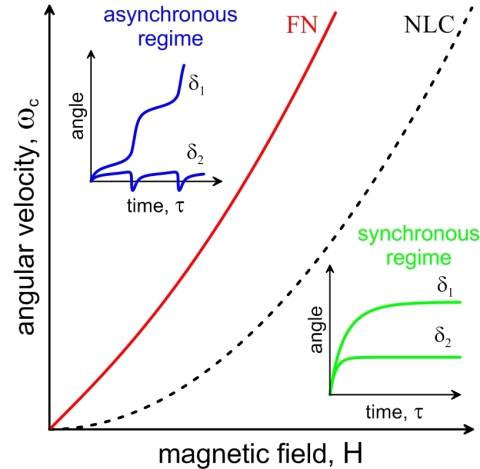