We investigate the occurrence of shear banding in nematogenic fluids under planar Couette flow, based on mesoscopic dynamical equations for the orientational order parameter and the shear stress. We focus on parameter values where the sheared homogeneous system exhibits regular oscillatory orientational dynamics, whereas the equilibrium system is either isotropic (albeit close to the isotropic-nematic transition) or deep in its nematic phase. The numerical calculations are restricted to spatial variations in shear gradient direction. We find several new types of shear-banded states characterized by regions with regular oscillatory orientational dynamics. In all cases shear banding is accompanied by a non-monotonicity of the flow curve of the homogeneous system; however, only in the case of the initially isotropic system this curve has the typical S-like shape. We also analyze the influence of different orientational boundary conditions and of the spatial correlation length. 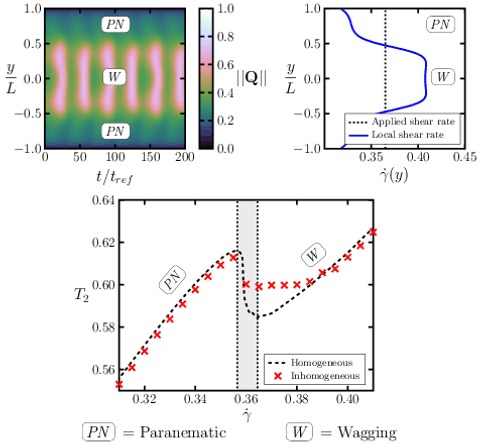