Motor-driven intracellular transport is a complex phenomenon where multiple motor proteins simultaneously attached on to a cargo engage in pulling activity, often leading to tug-of-war, displaying bidirectional motion. However, most mathematical and computational models ignore the details of the motor-cargo interaction. A few studies have focused on more realistic models of cargo transport by including elastic motor-cargo coupling, but either restrict the number of motors and/or use purely phenomenological forms for force-dependent hopping rates. Here, we study a generic model in which N motors are elastically coupled to a cargo, which itself is subjected to thermal noise in the cytoplasm and to an additional external applied force. The motor-hopping rates are chosen to satisfy detailed balance with respect to the energy of elastic stretching. With these assumptions, an (N + 1) -variable master equation is constructed for dynamics of the motor-cargo complex. By expanding the hopping rates to linear order in fluctuations in motor positions, we obtain a linear Fokker-Planck equation. The deterministic equations governing the average quantities are separated out and explicit analytical expressions are obtained for the mean velocity and diffusion coefficient of the cargo. We also study the statistical features of the force experienced by an individual motor and quantitatively characterize the load-sharing among the cargo-bound motors. The mean cargo velocity and the effective diffusion coefficient are found to be decreasing functions of the stiffness. While the increase in the number of motors N does not increase the velocity substantially, it decreases the effective diffusion coefficient which falls as 1/N asymptotically. We further show that the cargo-bound motors share the force exerted on the cargo equally only in the limit of vanishing elastic stiffness; as stiffness is increased, deviations from equal load sharing are observed. Numerical simulations agree with our analytical results where expected. Interestingly, we find in simulations that the stall force of a cargo elastically coupled to motors is independent of the stiffness of the linkers. 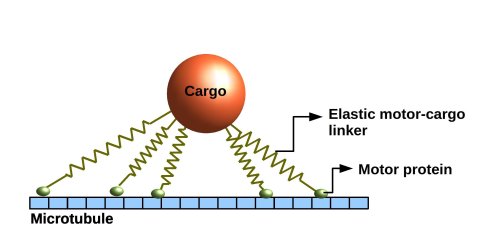