A popular description of soft membranes uses the surface curvature energy introduced by Helfrich, which includes a spontaneous curvature parameter. In this paper we show how the Helfrich formula can also be of interest for a wider class of spherical elastic surfaces, namely with shear elasticity, and likely to model other deformable hollow objects. The key point is that when a stress-free state with spherical symmetry exists before subsequent deformation, its straightforwardly determined curvature (“geometrical spontaneous curvature”) differs most of the time from the Helfrich spontaneous curvature parameter that should be considered in order to have the model being correctly used. Using the geometrical curvature in a set of independent parameters unveils the role of the Gaussian curvature modulus, which appears to play on the shape of an elastic surface even though this latter is closed, contrary to what happens for surfaces without spontaneous curvature. In appendices, clues are given to apply this alternative and convenient formulation of the elastic surface model to the particular case of thin spherical shells of isotropic material (TSSIMs). 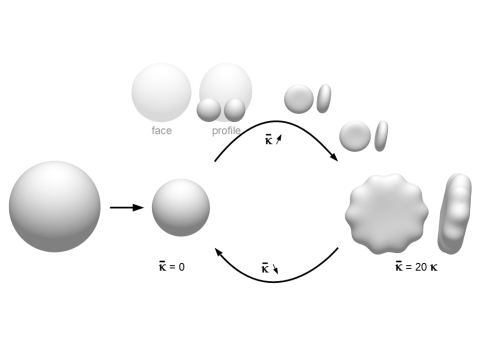