The pressure-driven growth model is considered, describing the motion of a foam front through an oil reservoir during foam improved oil recovery, foam being formed as gas advances into an initially liquid-filled reservoir. In the model, the foam front is represented by a set of so-called “material points” that track the advance of gas into the liquid-filled region. According to the model, the shape of the foam front is prone to develop concave sharply curved concavities, where the orientation of the front changes rapidly over a small spatial distance: these are referred to as “concave corners”. These concave corners need to be propagated differently from the material points on the foam front itself. Typically the corner must move faster than those material points, otherwise spurious numerical artifacts develop in the computed shape of the front. A propagation rule or “speed up” rule is derived for the concave corners, which is shown to be sensitive to the level of anisotropy in the permeability of the reservoir and also sensitive to the orientation of the corners themselves. In particular if a corner in an anisotropic reservoir were to be propagated according to an isotropic speed up rule, this might not be sufficient to suppress spurious numerical artifacts, at least for certain orientations of the corner. On the other hand, systems that are both heterogeneous and anisotropic tend to be well behaved numerically, regardless of whether one uses the isotropic or anisotropic speed up rule for corners. This comes about because, in the heterogeneous and anisotropic case, the orientation of the corner is such that the “correct” anisotropic speed is just very slightly less than the “incorrect” isotropic one. The anisotropic rule does however manage to keep the corner very slightly sharper than the isotropic rule does. 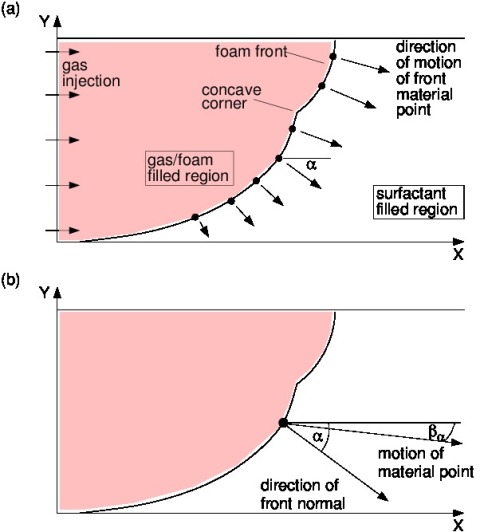