The relevance of biomimetic membranes using galactolipids has not been expressed in any extensive experimental study of these lipids. Thus, on the one hand, we present an in-depth article about the presence and role of monogalactosyldiacylglycerol (MGDG) and digalactosyldiacylglycerol (DGDG) in thylakoid membranes, their physical states and their applications. On the other hand, we use the Langmuir and Langmuir-Blodgett (LB) techniques to prepare biomimetic monolayers of saturated galactolipids MGDG, DGDG and MGDG:DGDG 2:1 mixture (MD)--biological ratio--. These monolayers are studied using surface pressure-area isotherms and their data are processed to enlighten their physical states and mixing behaviour. These monolayers, once transferred to a solid substrate at several surface pressures are topographically studied on mica using atomic force microscopy (AFM) and using cyclic voltammetry for studying the electrochemical behaviour of the monolayers once transferred to indium-tin oxide (ITO), which has good optical and electrical properties. Moreover, MD presents other differences in comparison with its pure components that are explained by the presence of different kinds of galactosyl headgroups that restrict the optimal orientation of the MGDG headgroups. 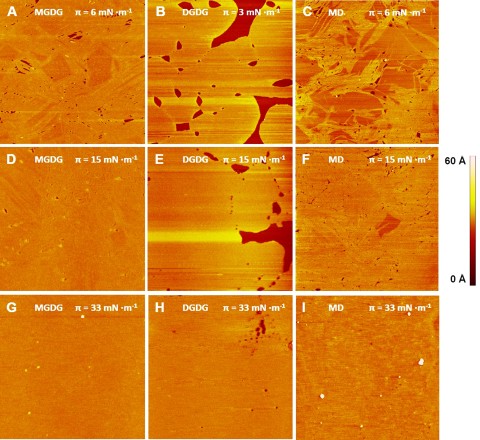