The motion of electrically charged particles under crowding conditions and subjected to evaporation-driven capillary flow might be ruled by collective diffusion. The concentration gradient developed inside an evaporating drop of colloidal suspension may reduce by diffusion the number of particles transported toward the contact line by convection. Unlike self-diffusion coefficient, the cooperative diffusion coefficient of interacting particles becomes more pronounced in crowded environments. In this work, we examined experimentally the role of the collective diffusion of charge-stabilized nanoparticles in colloidal patterning. To decouple the sustained evaporation from the contact line motion, we conducted evaporating menisci experiments with driven receding contact lines at low capillary number. This allowed us to explore convective assembly at fixed and low bulk concentration, which enabled to develop high concentration gradients. At fixed velocity of receding contact line, we explored a variety of substrate-particle systems where the particle-particle electrostatic interaction was changed (via p H) as well as the substrate receding contact angle and the relative humidity. We found that the particle deposition directed by receding contact lines may be controlled by the interplay between evaporative convection and collective diffusion, particularly at low particle concentration. 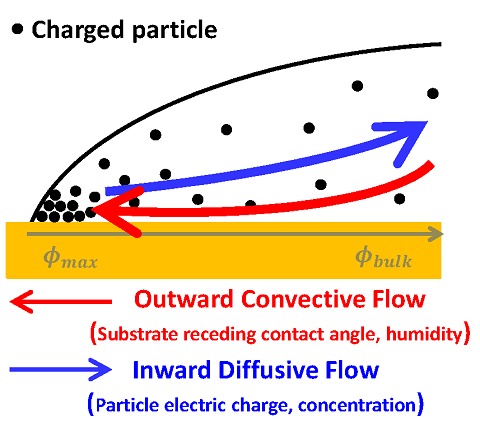