The flow regimes and the deposition pattern have been investigated by changing the ethanol concentration in a water-based binary mixture droplet suspended with alumina nanoparticles. To visualize the flow patterns, Particle Image Velocimetry (PIV) has been applied in the binary liquid droplet containing the fluorescent microspheres. Three distinct flow regimes have been revealed in the evaporation. In Regime I, the vortices and chaotic flows are found to carry the particles to the liquid-vapor interface and to promote the formation of particle aggregation. The aggregates move inwards in Regime II as induced by the Marangoni flow along the droplet free surface. Regime III is dominated by the drying of the left water and the capillary flow driving particles radially outward is observed. The relative weightings of Regimes I and II, which are enhanced with an increasing load of ethanol, determine the motion of the nanoparticles and the formation of the final drying pattern. 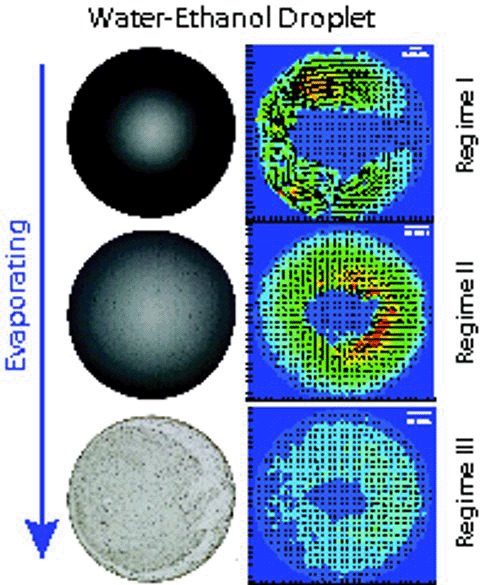