We study rotating stratified turbulence (RST) making use of numerical data stemming from a large parametric study varying the Reynolds, Froude and Rossby numbers, Re, Fr and Ro in a broad range of values. The computations are performed using periodic boundary conditions on grids of 10243 points, with no modeling of the small scales, no forcing and with large-scale random initial conditions for the velocity field only, and there are altogether 65 runs analyzed in this paper. The buoyancy Reynolds number defined as R B = ReFr 2 varies from negligible values to

105, approaching atmospheric or oceanic regimes. This preliminary analysis deals with the variation of characteristic time scales of RST with dimensionless parameters, focusing on the role played by the partition of energy between the kinetic and potential modes, as a key ingredient for modeling the dynamics of such flows. We find that neither rotation nor the ratio of the Brunt-Väisälä frequency to the inertial frequency seem to play a major role in the absence of forcing in the global dynamics of the small-scale kinetic and potential modes. Specifically, in these computations, mostly in regimes of wave turbulence, characteristic times based on the ratio of energy to dissipation of the velocity and temperature fluctuations, TV and TP, vary substantially with parameters. Their ratio

follows roughly a bell-shaped curve in terms of Richardson number Ri. It reaches a plateau --on which time scales become comparable,

-- when the turbulence has significantly strengthened, leading to numerous destabilization events together with a tendency towards an isotropization of the flow. 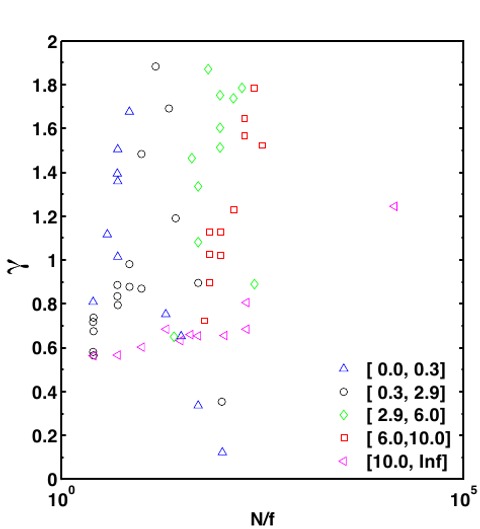