The problem of segregation of mixtures in a column of wet disks subjected to tapping is studied through a simple model that simulates, through a pseudo-dynamics algorithm, the formation of the packing and the successive tapping of it. The particles consist in a binary mixture of disks with two different sizes and the capillary forces are simulated stochastically by a sticking probability between the particles. We have recently shown that arch formation is one of the chief mechanisms determining size segregation in a non-convecting ensemble of dry disks (R.O. Uñac et al., Eur. Phys. J. E 37, 117 (2014)). In the present paper, we focus on the special role that capillary bridges can have on this type of segregation process, besides the proven effect of the presence of arches. We find that humidity between grains can enhance the segregation process in a binary mixture. In particular, for the case of the segregation of an intruder, humidity can promote the rise of the big particle even in cases where the number or the size of the arches would not normally favor the climb. 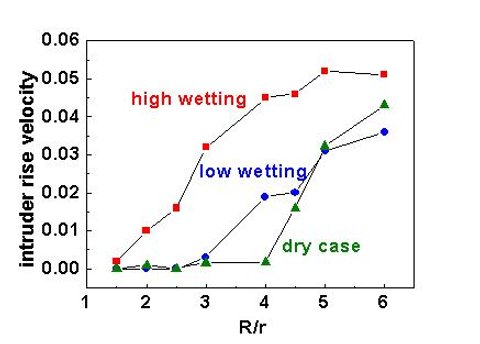