We present molecular dynamics simulations of the interaction of fullerene-like, inhomogeneously charged proteins with polyelectrolyte brushes. A motivation of this work is the experimental observation that proteins, carrying an integral charge, may enter like-charged polymer brushes. Simulations of varying charge distributions on the protein surfaces are performed to unravel the physical mechanism of the adsorption. Our results prove that an overall neutral protein can be strongly driven into polyelectrolyte brush whenever the protein features patches of positive and negative charge. The findings reported here give further evidence that the strong adsorption of proteins is also driven by entropic forces due to counterion release, since charged patches on the surface of the proteins can act as multivalent counterions of the oppositely charged polyelectrolyte chains. A corresponding number of mobile co- and counterions is released from the brush and the vicinity of the proteins so that the entropy of the total system increases. 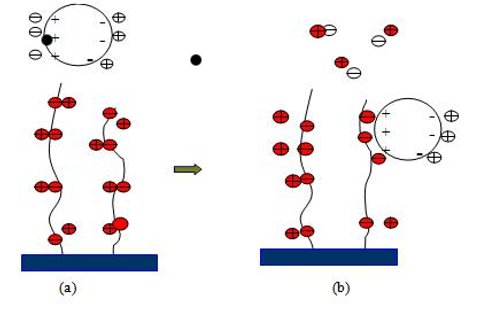