Supercooled colloidal or molecular systems at low densities are known to form liquid, crystalline or glassy drops, which may remain isolated for a long time before they aggregate. This paper analyses the properties of this large time window, and how it can be tackled by computer simulation. We use single-particle and virtual move Monte Carlo simulations of short-range attractive spheres which are undercooled to the temperature region, where the spinodal intersects the attractive glass line. We study two different systems and we report the following kinetic behavior. A low-density system is shown to exhibit universal linear growth regimes under single-particle Monte Carlo correlating the growth rate to the local structure. These regimes are suppressed under collective motion, where droplets aggregate into a single large disordered domain. It is shown that the aggregation can be avoided and linear regimes recovered, if long-range repulsion is added to the short-range attraction. The results provide an insight into the behavior of the virtual move algorithm generating cluster moves according to the local forcefields. We show that different choices of maximum Monte Carlo displacement affect the dynamical trajectories but lead to the same kinetically slowed down or arrested states. 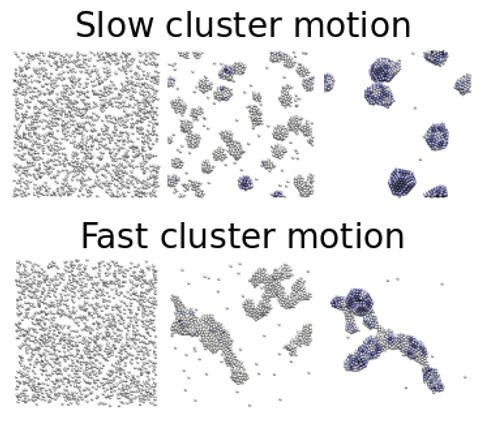