The ejection of drugs from micropipettes is practiced frequently in biomedical research and clinical studies however, little is known about the dynamics of this process. The fundamentals of disperse fluid injection via a capillary into an ambient immiscible fluid have been investigated extensively. Here, we experimentally investigate the bolus formation in micropipette ejection systems, where the injection and ambient fluid are the same. We experimentally measure the temporal evolution of the bolus formation in the same fluid. There are three different bolus formation mechanisms that arise from different Re t regimes: a) a nearly spherical bolus, b) a pear-like bolus, and c) a large distortion or axial jet. We examine the scaled dimensions of the bolus, R b/D t, L b/D t, H/D t, and α, as a function of the dimensionless parameters such as tip Reynolds number, Re t, dimensionless value of g/(D t . V t), the dimensionless time, tV t/D t, and the distance between the edge of the micropipette and the free surface, D/D t. The bolus radius for 0.2 < Re t < 30 grows according to t 1/2 in the entire time range, which allows us to estimate the time for complete bolus formation. 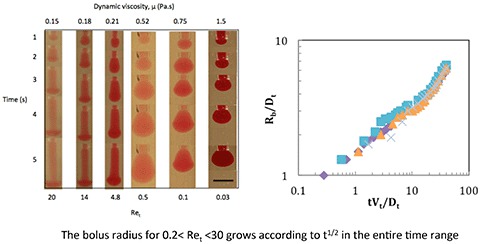